Why I Became a Rolfer™ - Fred Nehring 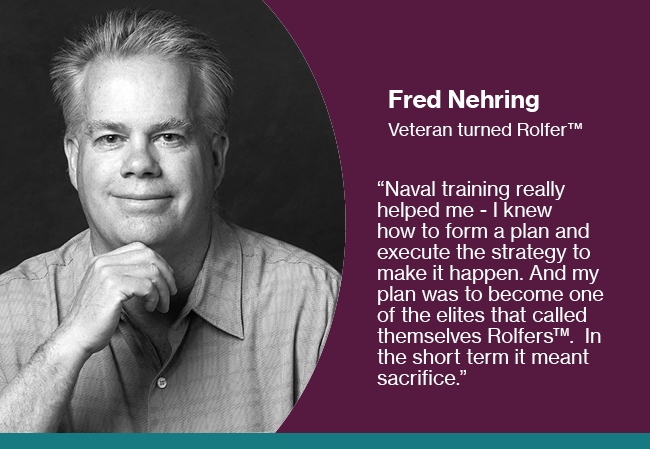 Why I Became A Certified Rolfer™

For me, becoming a Certified Rolfer™ was the furthest thing on my mind, especially in my 20‘s. Newly graduated from NTS (Naval Telecommunications School) in 1986, I was then stationed aboard the USS Kitty Hawk (CV-63). I was a member of the Communications Department working on the DARPA (Defense Area Research Project Agency) network - which would later become the Internet.

If you wanted responsibility in the Navy, they gave it to you, all you had to do was take the initiative. I was all in, and my superiors described me as someone who set the right example and demonstrated a "Can Do Attitude. I left active duty from the Navy in 1992 after Operation Desert Storm. Returning home, I was expected to run the family business - which I did for 10 years. Our specialty was uninterruptible power supplies, power distribution, AC/DC converters for critical loads like 911 systems, operation centers, computer rooms and telecom applications. My father founded the company in 1978 out of the basement of our home and grew it to 10-person operation.

But as the business continued it became very difficult to do business with the manufactures and electrical contractors. It felt like every contract was a fight to be won and every job an escalating challenge. I saw a lot of men dying in their late 50‘s and early 60‘s of heart failure and strokes, worn out from the high level of stress. I didn't want to have any part of that and it added to the growing discontent with the direction my life was heading. Day by day I became more disillusioned and resistant to the status quo that society expects from people.

I started to journal daily and use imagery to get out of my logical mind. Each morning I would ask myself questions like If I had enough money I would ___? If I could solve a world problem what would that be? Who would I like to meet? Who would I like to study with? What would I like to learn? If I could travel anywhere in the world where would it be? What would be my dream job? If I only had one year left to live what is one regret that I haven't done? The answers I found myself giving started to form a pattern of sorts and surprisingly, provide a new and hopeful sense of direction: if I had enough money I would help others in need and study abroad. Who would I like to meet? Jennifer Gardner, Steve Jobs, Julie Bowen, Phil Knight, Penelope Cruz, Dan Gable, Sylvester Stallone, Adam Sandler, etc. Who would I like to study with? Vladimir Janda, MD. Lee Overholser, Ph.D, Ida Rolf Ph.D, Grey Cook, DPT Thomas Hanna, Ph.D, etc.

Even though my day-to-day job was still challenging I felt like there was light at the end of the tunnel. I reviewed my journal and saw there was almost 70 images and mentions of Ida Rolf and Rolfing®. I knew this was a life-path I could follow and, I was going to have to take a big risk. I quit my job for a NY Times best-selling author in Southern California and enrolled in NHI in Encinitas, CA., the Muller College of Holistic Studies, and the International School of Professional Bodywork (ISPB) in San Diego, CA. It was there I saw a Rolfing® demonstration by Ed Maupin, Ph.D., CAR. He took a young woman who had trouble walking from a car accident when she was 15 yrs old and brought her to a state of health where she could move freely and completely pain-free.

I remember him being so detailed with his work and awed by his knowledge of anatomy and kinesiology guided by his skillful touch. The somatic experience and release from trauma the girl experienced during the session left an impression on me, andI knew I wanted to be able to help others in a similar way. There was no doubt in my mind this work was a calling for me.

I started researching Rolfing® (which at the time there wasn't a lot of public information on) and found, Rolfing®: Reestablishing the Natural Alignment and Structural Integration of the Human Body for Vitality and Well-Being by Dr. Ida P. Rolf, Ph.D., along with a Jon Martine, CAR, interview on the Oprah Winfrey show. I took some workshops with Erik Dalton, Ph.D., CAR. After a class, he pulled me aside and said, "You have talent, but you need a place to harness it, you need to become a Rolfer™ and there‘s only one place in the world you can do that - DIRI in Boulder. They‘ll make you better."

In 2008 I came back to Colorado from Southern California. My dad had passed away and even though I was pressured by my family to keep the business going, I closed it. It wasn‘t an easy decision, but it was the closure I needed and validation that I wouldn‘t give up on what I wanted. Even thought it was the height of the financial crisis, I was on a mission. The Navy SEALS have a creed that I use every day: If and when I get knocked down (life will knock you down and keep you there but only if you let it) I will get back up every single time. I will draw on every remaining ounce of my inner strength to do so. I‘m never out of the fight." Naval training really helped me - I knew how to form a plan and execute the strategy to make it happen. And my plan was to become one of the elites that called themselves Rolfers. In the short term it meant sacrifice. I slept in my car at night, eating the same food out of my crockpot for days at a time, and picking up odd jobs along the way. I was basically homeless, but knew I needed to make this kind of effort to make my dream happen. The money I saved was used for tuition - and the strategy paid off. I graduated from DIRI in 2011.

Not bad for a long-haired surfer guy from the beaches of SoCal - it was a major sense of personal accomplishment. Rolfing® has been good to me and brought me so much abundance. In 2014-2015 I got the opportunity to work with U.S. Olympians in Lake Placid, NY & Colorado Springs, CO. A few, in particular,Jessie Diggs and Kikkan Randal both won Olympic gold medals in Pyeongchang, SK. I‘ve also had the pleasure to work with the U.S. Women's Cross Country Ski Team, Steve Holcomb of USA Bobsled, 2010 Olympic gold medalist in Vancouver, CA Patrick Caldwell, the U.S. Men's Cross Country Ski Team, Laura Ryan of U.S. Women's Diving, Tyler Pierce, & Angela Wang, of the U.S. Women's Figure Skating, Margaux Isaksen of the U.S. Women's Pentathlon, Cheney Haight, U.S. Men's Greco-Roman Wrestling, Donovan Ford, U.S. Men's Weightlifting, Ginny Fuchs & Marlea Espanza of U.S. Women's Boxing, and Katie Davis of U.S. Women's Judo.

I remain grateful to have introduced the benefits of Rolfing® to such an elite group of athletes and for the opportunity the USOC Sports Medicine program gave me. I carry a real sense of pride and responsibility as a member of the Rolfing® community and remain indebted for the training that I received at Dr. Ida Rolf Institute (DIRI) and the faculty that has shaped my Rolfing® career. I know no matter where I go or what I do, I‘ll always have a skillset that allows me to accomplish what I wrote in my journal what seems like a lifetime ago - to help others.