Why I Became a Rolfer® - Jody Seay 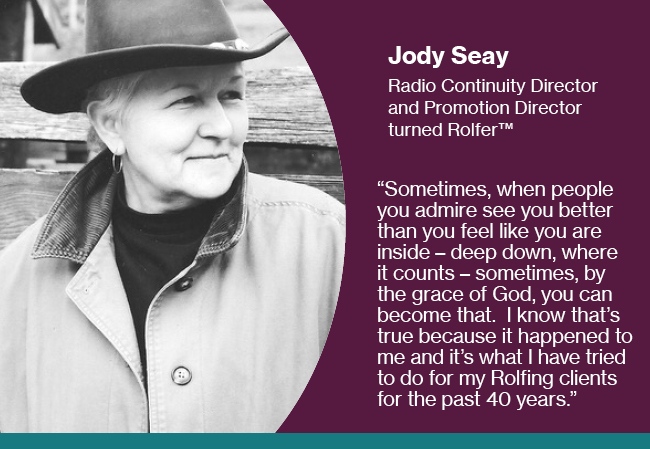 Sometimes, in your ragged little life, you get really lucky.  Sometimes, when people you admire see you better than you feel like you are inside – deep down, where it counts – sometimes, by the grace of God, you can become that.  I know that’s true because it happened to me and it’s what I have tried to do for my Rolfing clients for the past 40 years.

In 1978, I was perfectly happy in a job I loved for the fourth year, working with people I adored at the top rock ‘n roll radio station in Dallas, Texas.  I wasn’t a disc jockey; I was Continuity Director and Promotion Director, which meant that not only was I in charge of writing and producing commercials to air, but they also paid me to sit around and think up funny things to say and do on the radio.  Only a fool would leave such a great job, right? Well, follow me on my Fool’s Journey, then, because what I know to be true is this: EVERYTHING LEADS TO EVERYTHING ELSE.

At home one weekend, while cleaning out a closet, I was thumbing through some magazines and ran across a teeny article about Rolfing.  I was intrigued by it, had never heard of it, but decided to ask the News Director at the station if he had since he was from California and I figured Californians knew of everything weird first.  I was right. Chuck, the news guy, raved about Rolfing, had friends out in L.A. who’d been Rolfed eight years before and they just got better all the time, blah, blah, blah.  And, wonder of wonders, he’d just had a Rolfer on the Sunday morning talk show, a brilliant and kind man named Nicholas French.  Chuck gave me his phone number and I called. Nicholas and I talked for an hour or more. At the end of our conversation, I asked if I could think about it and call him back and he said, “Sure.”  As often happens in my life, the decision got made for me overnight, somewhere out in the Cosmos, because my first thought when I awoke the next morning was, “Oh, yeah, I need to call Nicholas.” And, that’s how the journey began.

I was born with crooked kneecaps and had been blowing my knees out playing sports for most of my life.  Having my right knee completely re-built in ’75 had resulted in a stiff leg and definite limp, which put an end to most sports in my life.  As much as I fought against the idea, I could see I was on the road to becoming a cripple at the young age of 28. Then, I got Rolfed and everything in my life changed – the outer parts, for sure, but, even more significantly, the inner parts, too.  Nicholas French and his wife, Janie, played such an integral part in who I evolved into that I savored my time with them – whether it was a Rolfing session with Nicholas, a Rolf Movement session with Janie, or just hanging out and talking with them, something we did a lot.  They knew me as well as anyone did, and, better than most people did, and – SURPRISE! – still loved who I was, all the while encouraging me to be better, think bigger, and never play small in the world. It was because of them that I wanted to do this work, to have that kind of impact on the lives of others.

I always wanted it to matter that I’d lived here, that the fact that I’d been on the planet made a real difference in the world.  I was 28 years old and realized that my entire career in radio was on a cassette, and, if I sailed that cassette out into the middle of the street in front of the radio station and a bus ran over it, that would be that – poof!  There’d be no evidence of my having made any kind of mark on the world at all.

So, I wrote to the Rolf Institute and got all the information I needed to begin.  I enrolled in a night class for anatomy and physiology; I enrolled in an early morning kinesiology class at SMU and went before work; I signed up for and took a massage class in the evening and on weekends.  Somehow, although I’m not entirely sure how this worked out, I managed to pitch an undefeated season for my softball team that year, too. Thanks to Rolfing, my formerly stiff-as-a-board right leg could bend again.  I can’t say that it made me fast, but, at least, I wasn’t sitting on the bench complaining about it which, you gotta admit, is a definite plus.

The hardest part was telling my co-workers at the station about my plans to leave.  I mean, they all understood; they’d all seen the miraculous changes in me. They understood the power of this work I wanted to do.  Those sweetie pies just didn’t want me to go. One day, while tormenting myself with the question of whether to change or not change my life’s path, I’d been sitting across the street from the station in what we called Wino Park (you can imagine why.)  It was in downtown Dallas, not far from the Court House, the jail, and several bail bonds outfits. My bare toes were wriggling in the fountain’s cool water. I was as confused as ever, but I put my socks and shoes back on and went back into the station.  When I got to my office, there was a magazine sitting on my desk. I had never seen this particular magazine anywhere before; I have never seen one like it since. I picked it up, flipped through it quickly, then flung it onto my desk where it plopped open, like something from a movie.  Down at the bottom of the page, now open to me, it said this: IF YOU DO NOT RISK CHANGING WHEN THE TIME IS RIGHT, YOU WILL PROBABLY BE FORCED TO CHANGE WHEN YOU ARE LEAST PREPARED FOR IT.  My decision was suddenly made.  The cranky old Cosmos came through one more time.  I had a friend who worked downstairs in TV who did calligraphy.  I cut that saying out, took it downstairs to him and asked if he’d do that in calligraphy for me, which he did.  I framed it and it has been in my office for more than 40 years. I’m looking at it above my desk right now.

I come from a long line of storytellers.  Indeed, one of the reasons I love this work is that I want to know everyone’s story – what makes them tick; what makes them proud, happy or even sad.  How can we get from a place they don’t like to a place that they do? How does change in the human structure affect that transition? How can I help with that?  Those are all the questions rolling around in my head when I’m working. My friend Judith, a longtime Rolfing client in Dallas, told me she thought I became a Rolfer so I could get people trapped in their underpants, tell them all my stories and they can’t run off.  When she said that, I thought, Hmmm…well, that’s not entirely untrue…”

So, that’s how it all came about, this Fool’s Journey.  Last year, 2018, I was inducted into the Texas Radio Hall of Fame for work I did over 40 years ago.  I guess those sweetie pies didn’t forget me, after all. I also launched my third book, one I wrote in collaboration with a Rolfing client of mine who’s an attorney.  It’s called ALMOST A MURDER and it’s quite fabulous, if I do say so myself – and, I do.  On May 9th of this year, it will be 40 years since I became a Certified Rolfer.  It’s been a heck of a ride for this cowgirl, but I’m not done yet. I’m still Rolfing, with no plans to retire as long as I feel like I’m making a difference and staying true to the work I’ve been blessed to do for so long.  I turned 70 this year which, technically, I guess, makes me a geezer, but I’m still looking for ways to leave my mark on the world, to make sure it mattered that I lived here. Since the Cosmos and I are close, personal buds, I’m sure something else will pop up and be flung my way.  I’ll snare it, whatever it is, and, do so with a grateful heart. Lucky me. JS