Why I Became a Rolfer® - Florian Thomas 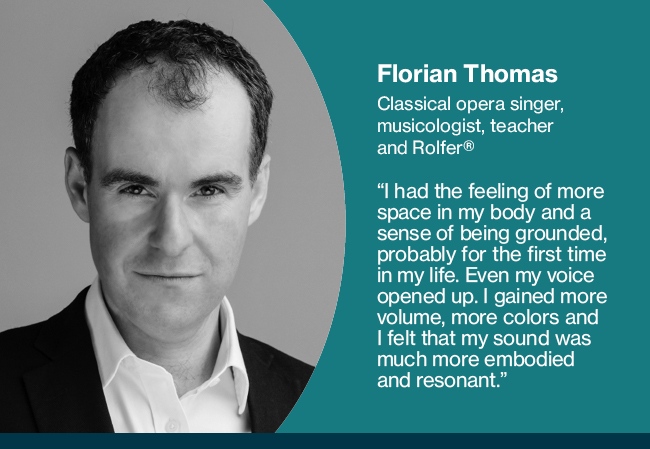 Why I became a Rolfer?

I am a classical opera singer, musicologist, teacher and a Rolfer. Since my background is not at all linked to bodywork or movement, I would have never guessed that I would enjoy doing hands-on bodywork with clients before having my first experience at an introductory workshop for Rolfing called “Spectrum” hosted by the European Rolfing Association.  I loved the work from my first encounter, and I continue to enjoy seeing my clients learning, improving and growing as much as I am.

As long as I can remember, I have suffered lower back pain, even as a small child. I always felt that the lower back was my weak point, stopping me from having fun with movement. I was a chubby child and teenager and saw my strengths as more intellectual than physical but there was nevertheless always a longing for movement. I struggled with my weight and thought that the back pain might be related to this battle. I was in the beginning of my twenties by the time a friend of mine recommended I see an osteopath. At the time, osteopathy was not commonly known in Austria, which is where I was born and grew up. This was my first encounter with manual therapy, and I would keep seeing the practitioner regularly for many years. While I was at university, I also discovered the Feldenkrais method and took classes. My pain didn’t disappear, but I learned how to cope with it.

As an artist and a musician, I have enjoyed being on a stage from childhood on. After voice studies I auditioned for a professional chorus and worked at a major opera house for several years. Being on stage means to be on your feet a lot, to be present.  Standing for hours during rehearsals, often on a sloping raked stage can be very physical and wasn’t easy for my body. The sheer amount of work, often taking place in the evenings and weekends, meant that following a regular therapy schedule or participating in a movement class became ever more difficult.

About ten years ago my wife, who is also a professional opera singer, sent me a link to a German documentary about connective tissue. She was fascinated by the topic and enthusiastic. The Rolfer being interviewed explained the role of fascia in the treatment of injuries and the last ten or fifteen minutes were about new techniques for surgeries that keep the connective tissue in mind.

Though I had just lost a lot of body weight, my back pain persisted, and my posture wasn’t changing for the better either. Now I wanted to try Rolfing, so I went online and found a Rolfer close to where we lived in Vienna. I felt that I was moving completely differently after the first session and suddenly I felt hope that this could be the solution. I remember calling my wife about it, as she was performing in London at the time. My back pain actually disappeared within 3 sessions. I was excited and went on to do the full 10 series.

I gained a completely different body awareness through that journey. Some of it was challenging, especially for my eyesight in relation to balance and coordination but I was astounded how many tensions that I had held as long as I could think, vanished. I had the feeling of more space in my body and a sense of being grounded, probably for the first time in my life, at least that was my perception. Even my voice opened up. I gained more volume, more colours and I felt that my sound was much more embodied and resonant. I told my colleagues at the opera house, my family, and friends that they had to see a Rolfer.  Many of them did try it and had similar experiences.

We then moved to the UK, and I started a freelance career as performer and had a private voice coaching studio. I kept telling my students about Rolfing because I felt that it was a booster for my own possibilities as performer. In 2016 however, I suddenly had an empty slot in my calendar. Two projects were cancelled, and I did not have a full teaching studio due to my performing schedule plans at the time. My wife had seen an advertisement for a training workshop in Germany and I remember her saying, “You keep recommending Rolfing to singers, why don’t you do it yourself and become a practitioner?” I had never thought about it, but I signed up. It was such a great experience, and I loved the community that I met there as much as I loved the work. Half a year later I started my training in Munich and I graduated in 2018.

When I started my work as a practitioner, I opened a studio in Oxford and one in London.  Through my network, apart from friends with all sorts of backgrounds, my first clients were students and colleagues who were mostly singers or actors. I started to go to voice conferences which allowed me to build a network that included speech and language therapists and ear, nose and throat specialists. I took extra courses in laryngeal manipulation taught by an osteopath who is a leader in the field. As a natural extension of this I began to see more and more clients with voice disorders, especially MTD (muscle tension dysphonia) and swallowing disorders. This is of course a big area of personal interest for me and after several years working in this field now, I’ve gained confidence and started to give talks about the subject.

I was recently invited to devise a workshop to raise awareness about vocal health, showing how we Rolfers can detect danger zones for voice use within the 10 series and what we can do about it. Vocal problems are often repetitive strain injuries, and it is very important to make sure that clients do not make the voice ‘pay the bill’ in trying to compensate imbalances in the body that are often connected to the breath, with tension in and around the vocal mechanism.

As singers and actors, we are sometimes eager to “come towards the audience” to literally move in the direction of the people we are performing for. That brings us in danger of losing the connection to the ground and the feeling of security that comes with it. The same can be true for the support that our back provides. I have heard colleagues say that they sometimes feel exposed and vulnerable on a stage despite enjoying the act of performing. I am sure that this has a physical component and I have seen numerous professional voice users (including speakers, singers, actors etc.) who were able to find more security and feel more present and in their bodies after Rolfing sessions. It is a big aim of mine to keep supporting my colleagues in the performing world, as much as I am also working with anyone who feels that Rolfing could be helpful in their lives.

Recently my wife was appointed professor of voice at one of the universities in Berlin, so we moved to Germany. Building a new practice in a new city under pandemic circumstances has had its challenges! However, life has been good, and things are actually developing faster than I would have predicted. A network is growing and a new balance between Rolfing, performing and teaching is coming into my life. Adaptability is one of the things that come to mind when I think about the current situation. The big gift that I see in being a Rolfer is of course the work itself, its meaning for our clients and for us as practitioners. I find it rewarding to work with so many different people and to be my own boss, with all the ups and downs that self-employment brings.

To get excited about a certain aspect of the body such as the voice and to put this knowledge back into the context of the body as a whole keeps me happy and joyful. I am very grateful for what Rolfing has given me, both as a client and being able to do this precious work and offer its benefits to others.